The development of a pseudarthrosis at lumbosacral junction continues to be a concern in spine surgery. Fixation failure due to poor bone quality of the sacrum and substantial biomechanical forces at this junction leads to a cascade of events that result in a pseudarthrosis. Historically, nonunion rates have been reported as high as 50%. 1,2 The development of sacropelvic fixation techniques has lessened the risk of implant loosening at the lumbosacral junction, limiting motion in this area thus allowing adequate time for the fusion to develop. The following chapter will review the various methods of sacropelvic fixation as well as discuss the advantages and disadvantages of each method.

Numerous indications for sacropelvic fixation exist. The main concept to using sacropelvic fixation is to eliminate cantilever forces as well as to diminish a flexion moment at the lumbosacral junction. By providing a distal foundation with pelvic fixation these forces are reduced, decreasing the risk of implant loosening that results in a nonunion.3 In the clinical setting, the indications to apply this method of thought and include sacropelvic fixation is in long fusions to the sacrum, high-grade spondylisthesis, corrective osteotomy in the lumbar spine to correct a flat-back deformity, correction of pelvic obliquity, sacral fractures resulting in spinopelvic dissociation and sacrectomy.

Similar to long fusions to the sacrum, the reduction of a high-grade spondylolisthesis also places high biomechanical stress on the S1 screws, and the placement of pelvic fixation can greatly limit the forces on these screws. 5,10-12

Sacral alar screws are directed approximately 30-45 degrees laterally and are placed in the lateral anterior cortical bone of the sacrum known as the ala.13 The placement of these screws has a narrow safe zone where they can be inserted. Failure to adequately place these screws can lead to injury to either the lumbosacral trunk or the internal iliac vein.  Not only do these screws have a high risk of injury to vital structures, they also have a high rate of pseudarthrosis in long fusions despite have high pullout strength.4,14 Due to the high complication risk and the development of newer techniques, the sacral alar screws have limited use.

Jackson intrasacral rods are vertically inserted in the lateral sacral area to the level of S2 and are attached to the S1 pedicle screws.15 The mechanism behind this method is that the sacroiliac ligaments and the portion of the ilium posterior to these rods provide enough support to limit pull out. The advantage of this method compared to other pelvic fixation methods is it does not cross the sacroiliac joint. However, it has limited use do to being technically demanding and because some patients do not have the sufficient sacrum size to place these rods to allow for adequate fixation. There is also concern that these rods do not have any biomechanical advantage when compared to traditional iliac screws and, therefore, are in limited use.16

The Kostuik transiliac bar is passed 1-2 cm anteriorly to the posterior superior iliac spine bilaterally and is attached to the S1screws with a longitudinal rod connecting this fixation to the rest of the construct through connectors (Fig. 9-1).17 This fusion technique has demonstrated a 97% fusion rate at the lumbosacral junction.17 However, it requires multiple additional connectors and is less effective in limiting the flexion/extension motion at the lumbosacral junction than the iliac or the S2AI screws. 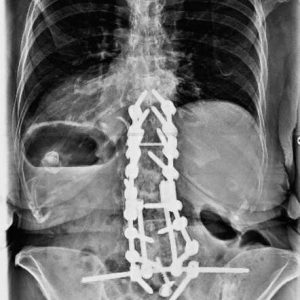 Galveston iliac rods are a contoured rod which is tunneled under the paraspinal muscles and is inserted between the inner and outer tables of the ilium.18 The iliac portion of the rod angles 20-25 degrees laterally from the posterior superior iliac spine and about 35 degrees caudally from the vertical. These rods are used mostly to treat neuromuscular scoliosis. Fusion rates with this technique range between 88-94%.4,19,20 The disadvantage of this technique is that the implants can become prominent and also the rod can be difficult to contour to the spine. Also, despite a fusion occurring at the lumbosacral region, a high incidence of implant loosening occurs due to micromotion at the tip of the rod and can lead to the need to remove the rod due to pain.19, 21

The modern development of the use of modular implants, pedicle screws, for spine fixation has led to the development of iliac screw fixation. Iliac screw insertion point is at the posterior superior iliac spine (PSIS) and is inserted at an angle of 25 degrees laterally from midline and 30 degrees caudal from the vertical. Offset connectors are typically used to connect the screw to the longitudinal rods (Figure 9-2). Some newer technique methods start the placement of the screw on the medial border of the PSIS or the rod is contoured so an offset connector is not needed. Iliac screw fixation allows one to obtain powerful control of the pelvis and allows extensive purchase of the ilium with using a screw length of 80-100 mm.22 Biomechanical studies have shown that the pullout strength of iliac screws are about 3 times higher than that of the Galveston rods which has shown higher fusion rates with the use of iliac screws.20,23,24 The disadvantage of this technique is these screws pose a risk of substantial morbidity. Due to the entry point of these screws at the PSIS, extensive surgical dissection is needed and may increase the risk of infection. The infection rate associated with iliac screw fixation is reported to be about 4%.24 The other major concern with placement of these screws is instrumentation prominence. Tsuchiya et al. reported a 34% revision rate at 5 years for removal of iliac screws due to prominence.25 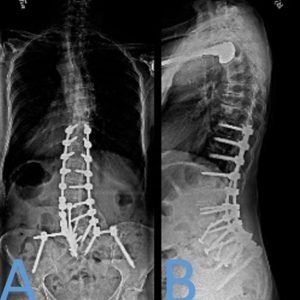 S2AI screws have been developed to provide iliac fixation with a starting point in line with the S1 pedicle screw. The starting point for this screw is the midpoint of a line that connects the lateral edge of the S1 and S2 dorsal foramina. 26 Compared to traditional iliac screws the starting point for the S2AI screws is approximately 15 mm deeper, which lessens screw prominence.27 Other advantages of the S2AI screws is less need of dissection laterally, using only one rod to connect all points of fixation without a need for additional connectors, and it does not interfere with iliac bone graft harvest, which can occur with iliac screws. Biomechanically, the S2AI screws tested equivalent to iliac screws in regards to lessening S1 screw strain.28 The placement of S2AI screws have several advantages over iliac screw placement. With that said, there is a learning curve for placing these screws, and, initially when placing them, it would be best to place them with fluoroscopy guidance. After the starting point, the trajectory is towards the anterior inferior iliac spine, which is lateral, approximately 40 degrees to the horizontal plane, and caudally about 20-30 degrees. The actual degree of caudal angulation relies on the pelvic tilt.29 Assessing the trajectory with fluoroscopy is best done after crossing the SI joint. The anteroposterior view and a teardrop C-arm view is beneficial to show the pelvis and sciatic notch and help guide the initial trajectory and ensure that the screw is in the thickest bone with no cortical breach (Fig. 9-3). A screw length greater than 80 mm and diameter of great than 8 mm is recommended (Fig. 9-4).

The most common indication to use pelvic fixation is with long fusions to the sacrum.  Without this fixation, there is a high rate of pseudarthrosis at the lumbosacral junction, which is mostly due to the high biomechanical stress on this level. Through the years multiple methods for pelvic fixation have been developed but, currently, the Galveston technique, iliac screws and S2AI screws are most popularly used. Each of these current methods has its advantages and disadvantages but is does appear the S2AI screws are most promising in terms of minimizing previous concerns with sacropelvic fixation. With that said, any surgeon performing complex reconstructive spine surgery should be familiar with how to perform all methods of sacropelvic fixation.