Specimens from humans and animal models are known to have revealed sensory innervation of lumbar intervertebral discs and sensory nerve ingrowth into the inner layer of intervertebral discs under painful conditions. Proinflammatory cytokines, such as tumor necrosis factor-a and interleukins induce this abnormal nerve ingrowth. Nerve growth factor (NGF) has also been identified as an inducer of ingrowth, and clinical trials using NGF inhibitor are ongoing. Finally, disc degeneration induces several collagenases; their actions result in hypermobility and pain. To understand discogenic lower back pain further, the purpose of this chapter is to review pain generators and pathways of degenerative disc disease from studies of humans and animal models.

SENSORY INNERVATION OF INTERVERTEBRAL DISCS UNDER NORMAL AND PAINFUL CONDITIONS

Sensory nerve fibers innervating discs derive mainly from the sinuvertebral nerve and distribute mainly to the outer third of the disc, and their pain thresholds are relatively high. These facts suggest that intervertebral discs are relatively insensitive to mechanical stimuli under normal conditions. However, it is well known that nerve fibers with a small diameter expressing pain-related neuropeptides such as substance-P (SP) and calcitonin gene-related peptide (CGRP) are present in the sensory nerve fibers around discs. Because such fibers are generally thought to act as nociceptors transmitting pain sensation, the lumbar intervertebral disc is recognized as a source of back pain.

In 1970, Shinohara first found that nerve fibers were present in the inner part of degenerated lumbar intervertebral discs of patients with discogenic pain.1  Freemont et al. reported the presence of nerve fibers expressing growth-associated protein (GAP)-43 in inner portions of symptomatic discs.2 Because GAP-43 is recognized as a marker of axonal growth, this indicates nerve growth into the disc under pathological conditions, and this abnormal nerve ingrowth can transmit the sensation of pain from the degenerated disc. In normal discs, a tight collagen network and aggrecan-rich environment function as barriers to prevent nerve fiber growth into the disc. An annular rupture in degenerated discs disrupts the tight collagen network and induces an inflammatory response and a decrease of the proteoglycan content in the disc. Among various inflammatory mediators present in the disc, nerve growth factor (NGF) is recognized as a key factor influencing nerve ingrowth into the disc.3,4 Upregulation of NGF in the ruptured discs has already been shown in an animal model and in humans,5 implying that NGF in the ruptured disc acts as a factor promoting nerve growth into the disc.

Aggrecan, a proteoglycan found in the disc, inhibits nerve fiber growth in vitro.6 From these observations, nerve growth into the disc is triggered by an annular rupture that disrupts the tight collagen network and is promoted by an increase of inflammatory mediators and the decrease of proteoglycans, both of which occur through the process of disc degeneration.

A degenerated disc is unable to spread the load evenly over the vertebral endplate, resulting in stress concentrations on the annulus and endplate. Such abnormal mechanical stresses may stimulate the nerve fibers to grow into the degenerated disc, although at this moment for various technical reasons, there is no direct evidence showing that nerve fibers transmit pain sensation from the disc in humans.

Sensory neurons innervating the lumbar intervertebral disc are present in dorsal root ganglia (DRG). DRG neurons are classified as small and large neurons. Most small DRG neurons are considered to be nociceptive and are subclassified as NGF-sensitive, and glial cell line-derived neurotrophic factor (GDNF)-sensitive neurons. This differential sensitivity to neurotrophic factors suggests that the two types of neurons have different characteristics. Almost all of the disc-innervating DRG neurons are NGF-sensitive,3 suggesting that pain sensation from the disc is transmitted mainly via NGF-sensitive DRG neurons. The distribution of the sensory fibers varies depending on the tissue. For instance, the cutaneous tissue is innervated by GDNF-sensitive neurons and NGF-sensitive neurons.3 This innervation implies that the intervertebral disc has an extremely high sensitivity to NGF because of a large amount of NGF-sensitive DRG neurons. This differential sensitivity to neurotrophic factors may explain the difference in characteristics of the pain sensation from the disc and cutaneous tissues. By contrast, the sensory neurons innervating muscles, knee joints, and visceral tissues show similar sensitivity to disc-innervating DRG neurons.7 Thus, the characteristics of discogenic pain seem more closely to resemble those of other musculoskeletal tissues such as muscle, knee joint, and visceral pain, rather than cutaneous tissue pain.

In the painful discs, inflammatory mediators including NGF are upregulated9 and may affect the activity of sensory neurons innervating the discs. Yamauchi et al. reported that conditioned medium from cultured human degenerated discs upregulates SP in cocultured DRG neurons.4 They also demonstrated that SP upregulation can be blocked by an anti-NGF agent. Orita et al. reported that direct intradiscal application of anti-NGF antibody suppressed CGRP expression in DRG neurons innervating the disc.10 These findings led us to conclude that NGF can modulate the pain sensation in degenerative disc disease.

Senory Innervation of the Intervertebral Disc under Normal Conditions

The vertebra, disc, facet joint, posterior longitudinal ligament (PLL), and dura mater are innervated segmentally by the dorsal ramus and the sinuvertebral nerves branching from the spinal nerve of the corresponding levels. There are sensory nerve endings in the annulus fibrosus of intervertebral discs. It is believed that such nerve endings originate from the sinuvertebral nerves branching from the ventral ramus of the spinal nerve and the ramus communicans (RC) of the corresponding level. However, the level of the spinal cord or DRG innervating the intervertebral disc has not been fully elucidated. 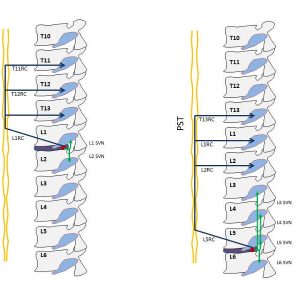 Change of Sensory Innervation of Intervertebral Disc under Painful Conditions

The presence of SP- and CGRP-immunoreactive (ir) nerve fibers has been demonstrated in the lumbar intervertebral discs. The percentage of SP-ir T13 to L6 DRG neurons was 30%, and that of CGRP-ir neurons was 47%. The proportions of SP- or CGRP-ir neurons in L1 and L2 DRGs innervating the L5-6 disc were not different from those in L3, L4, or L5 DRGs.15 These findings indicate that under physiological conditions in rats, DRG neurons at all levels have equivalent roles in disc pain sensation. However, the ratio of CGRP-ir DRG neurons was significantly higher in L1 and L2 DRGs innervating inflamed discs than in normal controls. Associated with the inflammation in the intervertebral discs, the change in CGRP-ir neuron distribution may complicate the mechanisms of inflamed disc nociception.

Degenerated discs contain proinflammatory cytokines such as tumor necrosis factor (TNF)-a, interleukin (IL)-6, and neurotrophins such as NGF and brain-derived neurotrophic factor (BDNF). These peptides play an important role as pain generators in DDD. TNF-a  plays a crucial role in inflammation in injured degenerated discs, because it induces the release of inflammatory neuropeptides including SP and CGRP from peripheral terminals via activation of the transcription factor nuclear factor-kappa B (NF-kB) to regulate proinflammatory cytokine gene expression and the transfer of nociceptive information.18 IL-6 acts as a proinflammatory cytokine that may lead to secondary injury, and a multifunctional cytokine crucial for cell differentiation and proliferation, maintaining homeostasis, immunity, and macrophage function. IL-6 binds to membrane-bound IL-6 receptors (IL-6R). The IL-6/IL-6R complex activates glycoprotein (gp)130, initiating an IL-6 intracellular signaling cascade followed by the activation of the Janus kinase-signal transducer and activator of transcription 3 (JAK-STAT3) signaling pathway to promote inflammation and tissue injury. In the injured degenerated discs in rats, both IL-6 and its receptor are strongly expressed in the annulus fibrosus and end plate cartilage cells of injured degenerated discs in rats,19 while other inflammatory cytokines tend to exist in the nucleus pulposus cells to lead to degeneration and pain by inhibiting the synthesis of proteoglycans.20 The IL6-expressing cells infiltrating the annulus fibrosus and endplates are probably macrophages.19

Neurotrophins produced in the local site of degenerated discs are considered to induce pain-related neuropeptides in the DRG neurons. NGF produced at inflamed or degenerative sites is a key peptide involved in certain chronic inflammatory or neuropathic pain states. NGF acts by binding with two structurally unrelated receptors: tropomyosin-related kinase A (TrkA) and p75 neurotrophic receptor (p75NTR). TrkA is a specific receptor for NGF, while p75NTR has low affinity for NGF. TrkA at the peripheral nerve terminal is involved in the production of an NGF–TrkA complex, which is retrogradely transported to effect and modulate changes in pain-related gene expression in the DRG. BDNF, a neurotrophin found in degenerated discs, also plays an important role in the local inflammation together with NGF.21 Like NGF, BDNF has two structurally dependent receptors: TrkB, a specific receptor for BDNF, and p75NTR.