The facet joints comprise the inferior and superior articular processes, which are bony protuberances that arise vertically from the junction of pedicles and laminae behind the transverse processes (Fig. 10-1). The articular processes are completely incorporated into the laminae in the lumbar region, so that the loads passing from superior to inferior articular facets diffuse into the lamina.1 Distinctive trabecular orientation is recognized running obliquely from the superior process downward to the inferior endplate and from the inferior process upward to the superior endplate in the sagittal plane.2,3 Furthermore, trabecular orientation mainly perpendicular to the articular surface in the transverse plane has been recognized in the superior process.4,5 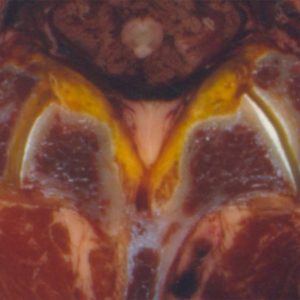 The anatomical definition of the term ‘‘facet’’ is a smooth flat circumscribed anatomical surface. Since articular surfaces on the superior and inferior articular processes are generally described as concave and convex, respectively, and are effectively not flat, the term “facet joint” may not represent well the geometrical characteristics of the zygapophysial joint.8 The facet joint in the transverse plane approximates a “C” or “J” shape. While it has been reported that approximately 80% of the facet joints are curved and 20% are flat in the upper lumbar spine, these numbers are reversed in the lower lumbar spine.9 Hadley showed the existence of concave articular surfaces in the inferior facet and convex articular surfaces in the superior facet in the sagittal plane, which are opposite curvatures in the transverse plane and conflict with the generally considered geometry of the facet joint surfaces.7 A surface inversely curved in two perpendicular directions, i.e., in one concave and in the other convex, is described as a “saddle” shape, which is described mathematically as a hyperbolic paraboloid. In fact, Steindler classified the lumbar facet joint as a saddle joint in his textbook.3

As is the case with other major synovial joints, the facet joint has a capsule. The capsule consists of an outer layer made of densely packed parallel bundles of collagen fibers and an inner layer of irregularly oriented wavy elastic fibers.10 The parallel bundles have been described as firm “transverse strengthening ligaments” by Putz.4 A recent study on the detailed lumbar capsular structures showed three bands of fibers in the outer layer of the joint capsule; superior curved fibers, middle horizontal running fibers and inferior curved fibers.11 The superior curved fibers form a distinct “dome-like band” that crosses the superior and superior-posterior parts of the joint. The middle horizontal fibers generally run horizontally but may also slant slightly downwards from medial to lateral. The inferior curved fibers form a distinct “hammock-like band” that crosses the inferior and posterior-inferior part of the facet joint.11

Proper knowledge of both the anatomical geometry of the facet joint surface and capsular structures are important inputs for biomechanical studies that seek to elucidate normal function and dysfunction causing osteoarthritis of the facet joint and spinal disorders.

BIOMECHANICAL FUNCTION OF THE FACET JOINTS

The same research group measured contact pressure between facet joint surfaces with pressure-sensitive paper under different postures and reduced disc height by nucleotomy and showed increased peak pressure with disc height loss and increasing extension.6,20 Dunlop et al. reported the contact pressure in the human cadaveric lumbar facet joint with a 1000N compressive load and a shear load of 200N to 400N and reported contact pressures of 6.1 MPa in the central-medial and central-inferior regions of the articular surface near its periphery for 6° of extension.20

Axial compressive load transmission through direct contact between the tips of articular processes and the neural arch (i.e., the lamina or the pars interarticularis) is important when the lumbar spine is extended and/or the height of the intervertebral disc is reduced because the distance between the tips of the articular processes and the neural arch becomes narrower in such circumstances. A histological study by Hadley demonstrated articulation between the tip of the superior articular process and the pedicle of the adjacent superior vertebra or between the tip of the inferior articular process and the lamina or the pars interarticularis of the adjacent inferior vertebra caused by telescoping or imbrication of the facet articulations in the lumbar segment with intervertebral disc height loss.7 In these facet joints, the original facet articular cartilage layers do not register exactly opposite each other, and the development of a fibrocartilage bumper due to intermittent pressure was noted at the tips of the articular processes.7  Yang and King estimated that 3-25% of axial compressive load is carried via the normal facets by an indirect method using cadaveric lumbar specimens.21 The authors claimed that the mechanism of load transmission is due to the bottoming-out of the tip of the inferior facet on the pars interarticularis of the vertebra below. Dunlop et al. also stated that substantial load might be transmitted from the tips of the facets directly to the lamina below, or to the pars interarticularis above.20 In the experiment by Dunlop et al., extra-articular impingement was only seen in maximum extension at full disc height, but when the disc had been made narrower it was found in all postures. The load transmission mechanism across the facet joint through bony contact was proven by direct measurement of facet tip contact pressure using a pressure transducer implemented at the tip of a 13-gauge steel tube, which was placed at the tip of the inferior articular process through the bone part of the process.22 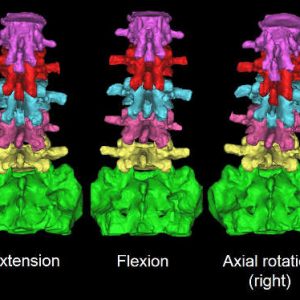 In lumbar extension, the inferior articular processes move inferiorly in reference to the superior articular process of the lower level (Fig. 10-3).24 Kozanek et al. measured the range of motion of the lumbar facet joint (L2/L3 - L4/L5) in vivo in healthy volunteers and reported that the facet joints rotated primarily along the mediolateral axis (average: 2° - 6°) and were translated in the cephalad-caudad direction (average: 2 mm - 4 mm) from full flexion to full extension movements of the trunk with more mobility in the cranial levels.25 Prasad et al. applied +Gz (caudocephalad) impact acceleration to embalmed whole human cadavers sitting on the load cell equipped seat pan and measured strain in the pedicle and lamina and load transmitted through vertebral body in order to estimate the load transmission through the facet joint.26 The results of that study demonstrated that both tensile and compressive loads could be transmitted via the facets or the posterior structures of the lumbar vertebrae and hyperextension of the spine transfers more load to the facets.26 The pressure measurement using the pressure sensitive film by Dunlop et al. showed that the contact area of the articular surface of the facet joint moved to the lower margin of the facet in full extension.20 This study estimated that facet joint carried 10 - 40% of the applied compressive force when in 4° of extension with 1 mm disc height loss.20 A finite element analysis by Schendel et al. also showed that the facet contact site on the inferior articular process of L1 moved inferiorly to a position of tip impingement near the lamina as extension moments increased, and large loads were transmitted through the facet joint during extension (205N at a 10N·m moment and 190N axial load).27 A cadaveric study with intact facet joint capsule by Ivicsics et al. showed that the capsular ligaments carry tensile force in the caudal-posterior directions, especially under the reduced intervertebral disc height condition, in addition to the compressive force transmission through the joint surface in the lumbar extended posture.23 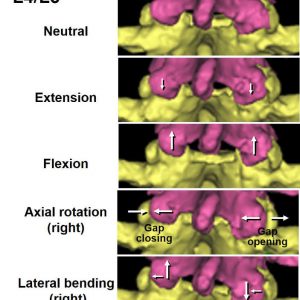 Contact between the tips of the inferior articular process and the lamina or the pars interarticularis can occur in lumbar extension, especially under intervertebral disc height loss conditions as described earlier in this review. Impingement of the capsule due to this bony contact has been postulated as a cause of pain associated with lumbar extension by many authors.6,10,11,17,20 Yang and King found that overloading of the facet joint resulted in rearward rotation of the inferior facets, the tip of which pivoted about the lamina below in compressive testing of the isolated posterior element of the lumbar spine.21 The results of finite element analysis simulations also postulated that hyperextension activities would cause impingement of the inferior process.27,28

In the lumbar axial rotation, the articular surfaces of the facet joint compress together on one side and tend to open on the other side (Fig. 10-3). For example, with right axial rotation, the left inferior articular process impacts the left superior articular process of the lower vertebra and joint space width in the right facet joint increases. The impaction of the facet joint surfaces limits the range of axial movement and protects excessive torsion of the intervertebral discs. The facets were found to carry large loads during axial rotation and cause the resultant contact force to lie at the posterior edge of the articulating surface at L1/L2.27

DYSFUNCTION OF THE FACET JOINT 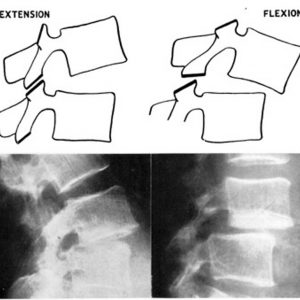 FIGURE 10-4. The “Over-ride” mechanism of anterior slippage in degenerative spondylolisthesis proposed by Macnab (Reproduced with permission).42

The lumbar facet joint exhibits complex 3D geometry including small components within this small joint, which closely link to biomechanical functions of the facet joint and the motion segment in different spinal positions.  Over-simplification of the facet joint as a flat joint may prevent proper understanding of the facet joint functions. Despite keen observations of 3D facet joint geometry and consideration of facet joint functions in 3D space reported many decades, even a century ago, development of CT scanning rather tends to limit investigators’ thought in a transverse plane. Axial load transmission and forward translation in motion segments cannot be fully understood without consideration of the special relationships among posterior elements of the lumbar spine. Current imaging modalities allow 3D modeling and re-slicing of the model in the clinical setting; however, valid information cannot be extracted without a proper understanding of the 3D geometry and function of the facet joint.