In this chapter, the authors clarify biomechanical difference in segmental instability following minimally invasive lumbar decompression compared with traditional procedures for LSS and destabilization models. We also present the anatomical detail of ligamentum flavum (LF), which plays a significant causative role in LSS. Based on the fundamental findings, we introduce a safe and reliable minimally invasive procedure with a video presentation.

Thirty fresh frozen porcine functional spine units (FSUs) with preservation of the motion segment, including two vertebral bodies, the intervertebral disc, all ligamentous structures and back muscles were obtained from ten mature porcine lumbar spines of similar size and age (mean age 6 months; mean body weight 70 kg). The FSUs were mounted in a specially designed testing device16 that was connected to a stepper motor with a 6-axis load cell system via an analog-to-digital converter. Displacement of the steel box was measured using a Laser Displacement Sensor. The linear bushing, specimen, load cell and stepper motor were longitudinally connected for the torsional loading system. The mechanical tester was designed based on the universal spine tester reported in a previous article. All specimens were first tested intact in 3 axial motions on the mechanical testing machine: flexion-extension, right-left lateral bending and right-left axial rotation. Each motion was applied to the specimen from a neutral position up to 1.5° at a loading rate of 0.1°/second with application of a constant axial compression preload of 70 N.17 The specimens were then decompressed before retesting and were randomized to the following 5 decompression models: microendoscopic posterior decompression (MED), 9 muscle-preserving interlaminar decompression (MILD),13  bilateral medial facetectomy (MF),6 left unilateral total facetectomy and bilateral facetectomy (Fig. 5-1). The standardized stiffness and neutral zone (NZ), the most sensitive parameter,18 were calculated by dividing the value of the parameter obtained after the surgical procedures and destabilization procedures by the baseline value obtained in the intact specimen. 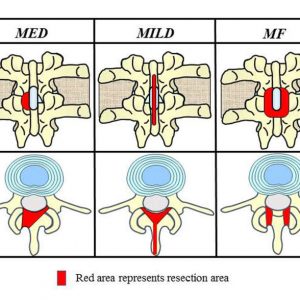 Although overall results in the study show that even a conventional decompression procedure, MF, can maintain the segmental stability, MED or MILD, are preferable than MF when considering the result of flexion. Comparison of postoperative stability among MED, MILD and MF revealed that MILD tended to affect stability least, followed by MED and MF.

Nerves are almost always compressed by the intervertebral disc and LF in LSS.20,21 Therefore total removal of ligamentum flavum (LF) is a basic procedure in the decompression surgery. On the other hand, intraoperative complication rate, especially dural injury during the procedure is still not negligible.22 Therefore, it is important to know the detail of anatomy of LF when surgical treatment is considered, because LF indicates the decompression area and also can play a role to protect the nerve tissues from injury due to drilling or resection of bony structure.

The authors investigated the anatomical details of LF using human cadaver (nine embalmed Japanese cadavers, seven males and two females, with a mean age of 74.2 years at the time of death, ages ranging between 59 and 96 years). At first, reconstruction-CT was taken for the en-bloc specimen after resection of all soft tissues from the spinal canal. Then, vertebral body was divided from the posterior elements at the pedicles and macroscopically observed whole aspect of LF. Then CT imaging with three-dimensional reconstruction was again performed for the posterior elements to clarify the location of LF. In the axial images of L4-L5 level, the cranial part, the disc level and the caudal part of LF attachments were investigated.

The whole shape of LF was like “a flying butterfly” toward cranial direction. There were distinct grooves of the nerve roots in the bone ceiling part of the foramen. LF attachment at the foraminal entrance was also clear. It was, however, difficult to distinguish the border between the capsular portion and the laminar portion macroscopically (Fig. 5-3). CT reconstructed images in the cranial section showed that although LF attachment at the midline is clear, the lateral part merges into the facet capsule (capsular portion). In the intervertebral disc level, LF covers the facet at the capsular portion. In caudal sections, LF attaches to the margin of the caudal lamina and the capsular portion is so thin that the laminar edge is close to the dural membrane (Fig. 5-3). These findings suggest that the margin of LF should be undercut at the cranial to the disc level, and the margin at the caudal portion be detouched while paying attention not to damage the nerve just beneath the thin LF. 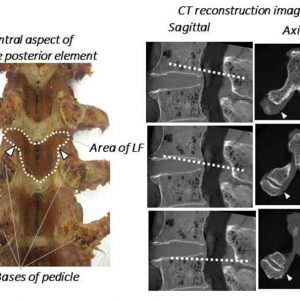 FIGURE 5-3. Anatomy of ligamentum flavum: the whole shape of LF presents as a flying butterfly toward cranial direction. Capsular portion is indicated by arrowhead. 19

Based on the aforementioned biomechanical and anatomical studies, we considered that ME-MILD is a desirable procedure for the decompression with total removal of ligamentum flavum preserving bilateral facet joint integrity and introduced ME-MILD as a routine procedure for LSS.14 The operation is carried out under general anesthesia with patients in a prone position on a Hall type frame. Following a 20-mm midline skin incision from the center of the crainial adjacent spinous process to the cranial edge of caudal adjacent spinous process, supraspinous ligament is longitudinally split at the median, and the dorsal surface of the spinous process is exposed. Preserving all the multifidus muscles, the spinous process is longitudinally split by a high-speed drill and fractured at the base of laminae, and the ligamentum ﬂavum is exposed. Then, medical parts of inferior facets are also drilled. These procedures are done with a magnifying glass. A tubular retractor with a diameter of 16 mm is placed. Then, microendoscopic decompression using METRx microendoscopic discectomy system (Medtronic Sofamor Danek, Memphis, TN) is performed in the wide operative ﬁeld. The caudal part of the upper vertebral lamina is resected sufﬁciently to reach the cranial edge of the ligamentum ﬂavum, and the lateral recess is decompressed releasing the nerve root.

The patient is permitted to stand up and walk after recovery from anesthesia with a corset. A suction drainage tube is placed for 1 to 2 days to prevent postoperative epidural hematoma.

A 59-year-old man was referred by neurologic claudication. On presentation, he could not walk more than 100 m due to buttock to leg pain with Oswestry Disability Index (ODI) = 24.4%, Visual Analog Scale (VAS) (LBP/leg) = 35/80. Preoperative flexion-extension X-ray showed L4 degenerative spondylolisthesis (Fig. 5-4A). MRI demonstrated central type spinal canal stenosis at L3-4 and L4-5 without significant facet opening,23 indicating that the segments were stable (Fig.5-4B). Therefore, we scheduled ME-MILD for L3-4 and L4-5.

Following surgery, the symptoms were dramatically improved and he was enjoying normal daily activity with ODI =2.2% and VAS (LBP/leg) = 0/0 at postoperative one year. Radiographic evaluation demonstrated decompression of the spinal canal at L3-4 and L4-5 levels without deterioration of spondylolisthesis or facet joints (Fig. 5-4C). 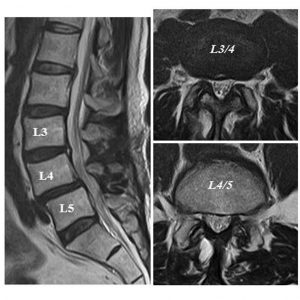 FIGURE 5-4C One year postoperative MRI examination following microendscopic muscle-preserving interlaminar decompression (ME-MILD).14 The detail of the technique will be presented in the video.