Above the Knee Amputation 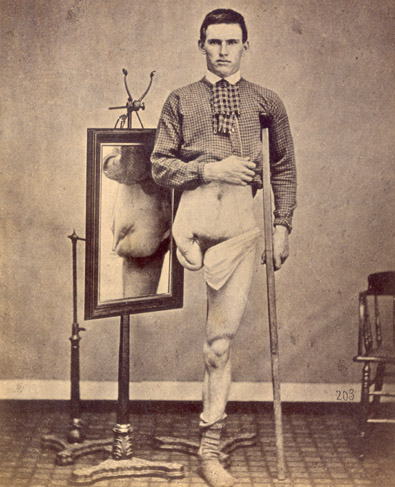 - AKA Prosthesis:
- Amputations in the Diabetic Patient

- Discussion:
- average AK amputee walks 43% slower and expends 89% more kcal/min than the normal person;
- if proximal circulation is adequate, a longer anterior muscle flap may be left and the combination myodesis-
myoplasty technique is used;
- ability to ambulate with a prosthesis depends heavily on the fitness of the patient;
- in the study by Dougherty PJ (1999), the records of 23 patients who had bilateral traumatic above-the-knee
amputation were reviewed;
- 22 % of 23 respondents used prostheses for walking; the devices were used for an average of 7.7 hours per day;
- ref: Long-term follow-up study of bilateral above-the-knee amputees from the Vietnam War

- Technique:
- tourniquet is routinely used;
- level of the bone transection 4 to 6 inches proximal to the knee joint line;
- fish mouth incision is made distal to the level of bone transection;
- anterior flap is created so that the scar will be posterior;
- the surgeon can create a full thickness flap upto the superior pole of the patella;
- adductor musculature:
- preservation of the adductor magnus helps balance out the forces generated by the abductors;
- ensure that adductor musculolature and the iliotibial band are not dissected with the fish mouth, but rather, are dissected 4-5 cm distal to the the skin incision;
- create a long adductor muscle flap;
- at the end of the case, the adductor flap can be sutured to and across the end of the femur;
- by creating an adductor myodesis to the femur, the femur will be prevented from moving to a flexion-abduction position (which is otherwise common);
- anterior musculature:
- anterior musculature is transected sharply with a large scalpel blade or a sharp amputation knife, allowing the muscle to retract to the level of
the intended bone transection;
- femoral transection:
- transection of the femur early in the case allows subsequent easy access to neurovascular bundle;
- knife is used to elevate the periosteum off the femur;
- femur is transected, and retracted anteriorly and laterally with a large bone hook;
- neurovascular bundle:
- profunda femoris lies just posterior to the femur, and the SFA lies just posterior to the vastus medialis muscle;
- posteromedial & posterior muscle can then be systemically transected and the major vessels identified, clamped, and doubly ligated;
- sicatic nerve is placed on gentle stretch & ligated w/ slow cautery;
- posterior musculature:
- posterior musculature is freed from femur w/ periosteal elevator and periosteum is cut circumferentially at level at which anterior musculature
has retracted, ie. the level of bone transection;
- adductor myodesis:
- drill holes (7/64 inch) are placed are placed thru the cortex of cut end of femur approximately 3/8 inch above distal end;
- adductor flap is sutured to and across the end of the femur (utilizing the drill holes) with care taken to keep the femur in maximum adduction
as the adductors are tied down;
- this prevents the musculture from hanging and retracting and removes tension from the anterior myocutaneous flap;
- quadriceps myodesis:
- the quadriceps can be secured to either the adductor flap or to the posterior femur;
- in either case, the femur should be in full extension as the quadriceps is secured inorder to avoid hip flexion contracture;

- Knee Disaarticulations:
- primarily indicated in children, since the distal femur provides 70% of the femoral length;
- in children the femur may not grow as much in length;
- transect Gastroc 2-3 cm below origin, (saves superior genicular artery);
- when electing BK conversion of BK to KD is not usually successful, while primary KD may be;
- therefore, if there is question of wound healing, KD decision made initially, may save pt from having failed BK w/ AK conversion;
- in the report by Bowker JH, et al (2000), the authors report a method for closure of a knee disarticulation wound
with use of the posterior calf skin and gastrocnemius muscle bellies as an integral flap, without destruction of the perforating vessels, was
described by Klaes and Eigler in 1985.
- advantage is that there is padding of the distal part of the femur with the gastrocnemius muscle bellies and that it preserves the blood supply
that passes from the gastrocnemius muscle bellies to the skin;
- 80 knee disarticulations, performed with use of the flap described by Klaes and Eigler, in 77 patients were evaluated in a prospective manner;
- total of 67 stumps (89 percent) healed; sixty-three (84 percent) of them healed primarily.
- major wound dehiscence occurred in 7 stumps (9 %), requiring revision to the transfemoral level;
- 22 (81 %) of the 27 patients who could walk before surgery were able to walk with a prosthesis after it;
- technique:
- plane between the gastrocnemius and soleus muscles is most easily found on the medial side;
- muscles then are separated by blunt digital dissection;
- flap is then freed at the distal end of the gastrocnemius;
- anteriorly the distal skin is dissected from the patellar tendon and the tibial tubercle;
- patellar tendon incised at distal insertion and fat pad is incised;
- knee joint capsule is divided circumferentially just proximal to the menisci;
- patellar tendon is attached to the cruciate ligaments with the hip extended to avoid creating excessive tightness of the rectus femoris
and a resultant hip flexion contracture;
- hamstring tendons then are attached to the knee joint capsule to preserve their function as hip extensors;
- iliotibial band is secured to the lateral aspect of the capsule to enhance abductor function in single-limb stance as well as hip extension
through the gluteus maximus;
- referenes:
- North American experience with knee disarticulation with use of a posterior myofasciocutaneous flap. Healing rate and functional results in seventy-seven patients
- [A new technic of transgenicular amputation]
- Failures in through-knee amputation.
- Disarticulation of the knee. A modified technique.
- A modified Gritti-Stokes amputation: its place in the management of peripheral vascular disease.
- Knee disarticulation versus above-knee amputation.
- Disarticulation of the knee. A modified technique.
- A prospective randomized comparison of healing in Gritti-Stokes and through-knee amputations.
- [Gritti's amputation. Surgical technic, apparatus and indications.]


- Hindquater Amputation:
- procedure is most often performed for pelvic tumors;
- generally has a poor prognosis and has a high morbidity when performed for high grade tumors;
- failure of wound healing and/or flap necrosis may be a common problem;
- risk factors for morbidity:
- medial extension into the SI joint or the sacrum;
- inability to preserve the internal iliac vessels and/or the need to perform a sacral osteotomy are strong risk factors for wound healing problems;
- references:
- Hindquarter amputation for pelvic tumors. The importance of patient selection.
- Hip Disarticulation Using the Lateral Approach. A New Technique

Function after through-knee compared with below-knee and above-knee amputation.

Limb-salvage treatment versus amputation for osteosarcoma of the distal end of the femur.

A new technique for reconstruction of an open above-knee amputation.

An effective method of skin traction in A-K guillotine amputation.