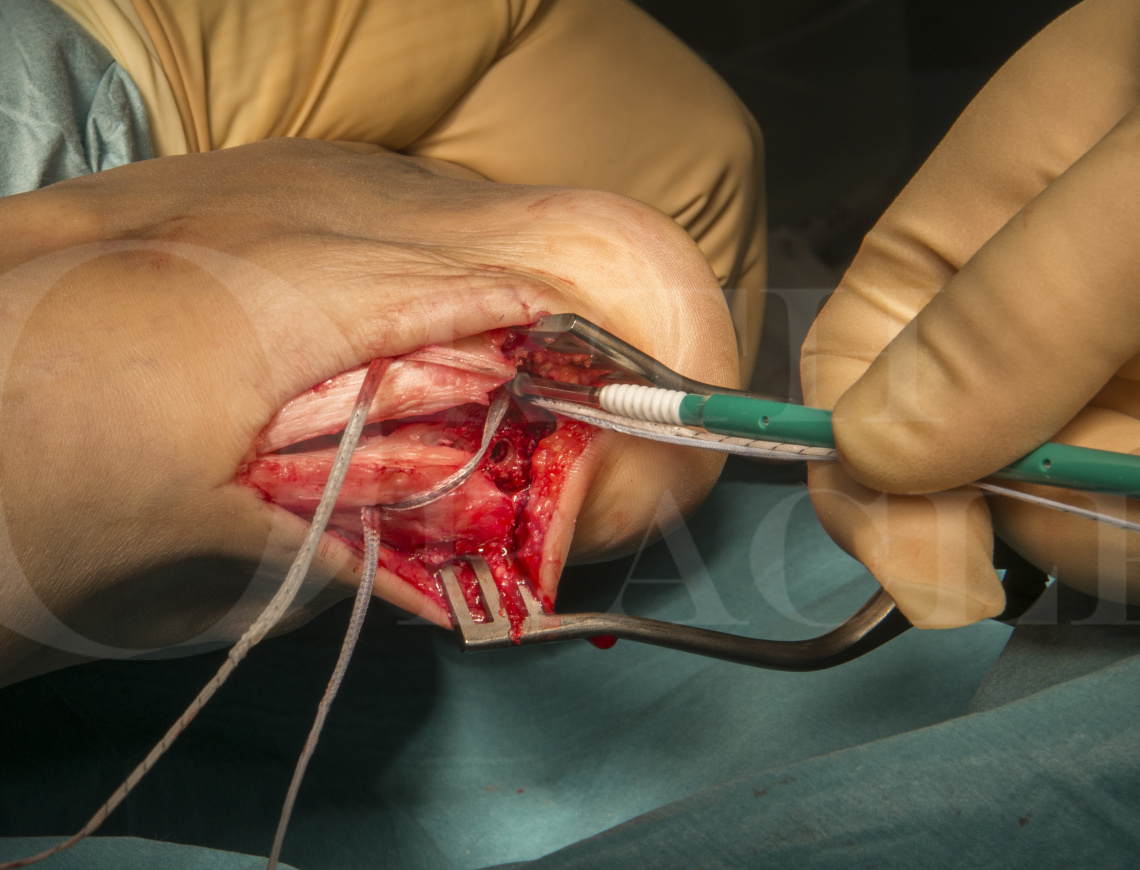 There are three main varities of pathology effecting the area of the achilles tendon insertion and to which the description of a Haglunds’ deformity is commonly(and loosely) applied.

Most often the pathology is one of degenerative change at achilles the insertion associated intra-tendinous calcification. There may or may not be an element of anatomical prominence of the postero-lateral calcaneus associated. This tends to produce a fairly broad based swelling across the back of the heel. Usually the painful area is located laterally but it can on occasion be postero-medial.

Less commonly the achilles tendon is normal and the issue is an anatomical prominence of the postero-lateral corner of the calcaneus, causing pressure when in shoe-wear.

The third variation is a calcaneus that is anatomically  prominent posteriorly, laterally and also  superiorly. This can cause direct impingement upon the deep(anterior) aspect of the Achilles in the retro-calcaneal area.

These cases should be imaged using cross sectional imaging to determine  the location of both bony deformity and tendinopathy. This will assist in deciding upon the surgical approach to be taken. This will also on occasion show evidence of associated retro-calcaneal bursitis which should be intercurrently treated.

These variations in pathology can be treated using the same surgical principles and with successful outcome expected in the majority of patients. The key is to identify the exact location and nature of the pathology causing symptoms. Non-operative treatment is somewhat less successful when adopted here than for problems with the main body of the achilles tendon.

In my practice I use the Speedbridge for cases of insertional achilles tendinosis where there is significant intra-tendinous calcification that will require extensive detachment of the tendon for adequate access. The Speedbridge provides a far more robust level of fixation for the achilles than any alternatives. One can be as extensive as required therefore with the level of dissection. The technique is though without doubt more involved than simply using a postero-lateral or postero-medial approach and fixing the tendon back with a Bio-corkscrew anchor, which covered on OrthOracle at Haglunds deformity: Arthrex Bio-corkscrew fixation and a postero-lateral approach.Generally the surgery is easier performed with the patient prone but as this technique demonstrates it cab be done with the patient well supported in a lateral position.

The Arthrex SpeedBridge implant itself is very much a really useful part of the surgical armamentarium available to treat Haglunds cases. It should be remembered however that of greater importance is identifying the various potential sources of symptoms and treating them all. Also whatever the operative technique used careful skin handling throughout is required as well as in the post-operative period. The soft tissue cover here is thin and prone to delayed healing.

View this procedure on OrthOracle.com

- Discussion:
- inflammation can be related to a Haglund deformity (postero-superior prominence - normal varient) which  causes an overlying bursitis;
- prominence of the posterior superior calcaneal tuberosity contributes to inflammation of the overlying tissues and the Achilles tendon;
- most often occurs in women and is related to shoe wear w/ rigid heels or heel counters;
- patients note posterolateral prominence and tenderness;
- diff dx: achilles tendinitis

- MRI:
- useful to determine if there are distinct degenerative areas within the tendon (achilles tendinosis), which might require debridement if resection of
the Haglund's deformity were indicated;

- Non Operativer Treatment:
- non operative treatment consists of heel cord stretching, change in shoe wear, NSAIDS;
- raising the heel out of the shoe with a heel insert, shifts the contact against the heel and often relieves symptoms; 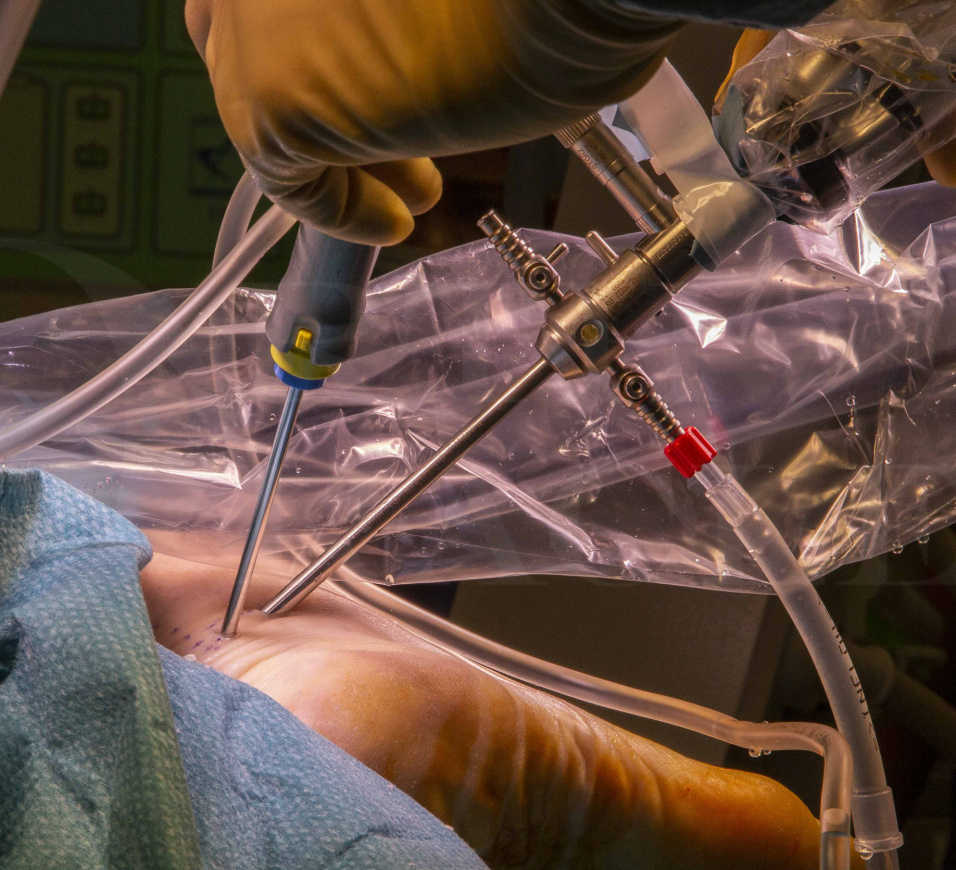 Endoscopic calcaneoplasty is an operation for achilles pain secondary to a Haglund’s deformity, which is often due to the superior calcaneal process impinging upon the soft tissue posterior to it, often an associated retrocalcaneal bursitis.  The term “impingement achilles pain” is being used for the condition more recently, which seems appropriate.

Once conservative measures such as shoewear modification, physiotherapy, heel raises and injection therapy have failed, surgery is the next step.

The traditional surgical procedure is an open excision of the Haglunds deformity, performed by a longitudinal posterior approach, with the Achilles being split down the middle. The Achilles is partially or fully reflected from its insertion, to expose the superior calcaneal surface and associated retrocalcaneal bursa. The prominent bone and bursa are then removed with an osteotome.   It is a successful operation but has a long recovery due to the careful rehabilitation required after achilles detachment. There can also be issues with delayed wound healing and irritation to the superficial nerves, due to the location of the approach.

The endoscopic procedure combines the advantages of minimally invasive surgery and arthroscopic techniques, allowing immediate weight-bearing and potentially light sporting activity from 3 weeks.The surgery is performed through two small “arthroscopy portals” on the lateral side of the heel, and under X-ray guidance.  The initial procedure is to remove the Haglunds “bump” with a minimally invasive burr, followed by the endoscopy to clear debris and excise the bursa, under direct vision.   The achilles tendon and insertion is not interrupted and so recovery is very rapid.

One limitation of the technique to be aware of is that it is not possible to deal with areas of intra-tendinous calcification or insertional tendinosis, so this needs to be excluded pre-operatively.

In general it is very successful, but as with all achilles surgeries, the outcomes can be variable as often the pain from any achilles tendinitis can go on for sometime afterwards.

It is important to assess the patient for any concomitant problems such as gastrocnemius tightness, that can be addressed at the same time.

View this procedure on OrthOracle.com

Operative management of Haglund's deformity in the non athlete: a retrospective study.

Chronic retrocalcaneal bursitis treated by resection of the calcaneus.

Prominence of the calcaneus: late results of bone resection.

The Achilles tendon insertion is crescent-shaped: an in vitro anatomic investigation.

Surgery for retrocalcaneal bursitis: a tendon-splitting versus a lateral approach.